See the full gallery on posterous

Posted by Shari Photography at 7:31 AM No comments:

I wish I was a Thief- the pictures

See the full gallery on posterous

Posted by Shari Photography at 7:26 AM No comments:

I wish I was a Thief-

Rule 1 of Urban Exploration Photography-  don't take anything.  It's ok to break into structures-  just don't take a thing.  This was the HARDEST photo adventure for me.  An abandoned bookstore-  thousands of hardback books-  rare, limited editions, tens of thousands of records.  As a book lover this was the Everest of finds.   Read more about this haunting photo adventure at:  http://www.shariphotography.blogspot.com/

Posted by Shari Photography at 7:13 AM No comments:

I wish I was a Thief - Abandoned Bookstore

These pictures have haunted me since I took them in October. I have only recently brought myself to look at them.
While exploring the original Route 66 around Carthage Mo, we came across an old gas station. I wasn't too excited by it. We had photographed a lot of these type places and frankly I was a tired of them. Also, the trailer park with the numerous Confederate flags flying made me very nervous. But, next to the gas station was an older building, covered with shrubs and slowly falling apart. It had a Pabst Blue Ribbon Bookstore sign in front. Intrigued, we thought we'd take a quick look. I was tired by now, hungry for breakfast, and dirty from all the places we had been that Sunday. Just one quick look and we can head home. I peered through the broken window and saw the most depressing sight I have ever seen in all my photo adventures.
An abandoned bookstore.
Vandals had broken in. They had pushed over some of the shelves and thrown chairs through the glass cabinets. But other than that, nothing had been taken. I quickly started taking pictures from the outside. I couldn't believe my luck. A once in a lifetime find. I felt like one of the first archeologists opening an Egyptian tomb.

To get different angles, I walked around the building till I came across a large shed. Inside were stacks and boxes books. There must have been tens of thousands of books- all hardback. The room was almost totally dark and had the strong musky odor of mold. Water damage had destroyed this part of the store. These books were impossible to save.

But the main store was still intact. I had to get in.
The front door was easy to open, but a large plywood across the front made access difficult. The only way in was to crawl through an narrow space between the plywood and the top of the door. I still have the scrathes and bruises on my hip from that entrance.
The store was as large as 3 classrooms, with dozens of rows of books and records. At the front entrance, the rare and limited editions- hundreds of them stacked neatly in a broken glass cabinet.
This was not some used junky bookshop. This owner was a book lover. He was a collector and a lover of all books. I took an immediate liking to the guy.
I started shooting furiously. I wanted to document as much as I could. The back end of the store was totally dark and impossible to photograph. I could just make out the silent rows of books. Shit- why didn't I bring my flashes.
I spent about 20 minutes in the place. I ran around shooting everything. I had no idea what I was photographing. My focus was on the exposure and shutter speed, mostly to keep me from contemplating one thought. The longer I stayed the more this thought grew and took over.
Take the books and run.
Who would know? The place had been abaondoned for probably a year. I could "liberate" them. There was nobody around. These were books! The roof was caving in around the building. One good rain and all the books would be destroyed by the spreading mold in a matter of weeks. Just take the fucking books...
As I stood in this most incredible, lonely, haunting, and empty bookstore, I made my choice. I crawled back through the door, growled at my friend that it was time to go. He wanted to see what I had taken, but I had had enough of this damned place. It was time to leave.
Since then, I have considered driving back to the shop and liberating as many books as possible. The thought of all those books, thousands of them, being destoyed over then next few months is heartbreaking.
But no matter how I can justify it, taking the books would be stealing someone elses stuff. The owner, there was a picture of him and a litle girl in an opened drawer, may come back.
Posted by Shari Photography at 5:53 AM No comments:

Read all of our Wedding Photography Reviews at 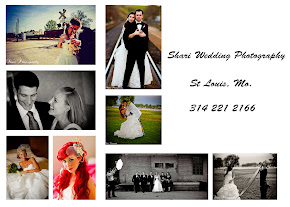